WALLTRANSFORM as a company have received many prestigious awards recognizing their innovation, quality and environmental benefits

Local company recognised for excellence in design and innovation

Local insulation company,  Walltransform Ltd of Stokesley, North Yorkshire has been recognised for its outstanding Design and Innovation by winning a prestigious industry award at an event hosted by the National Insulation Association (NIA) this month.

"Walltransform Ltd beat stiff competition to win, with the judges commenting; “Entries in this category were of a very high standard with Walltransform demonstrating a process on a property with blocked cavity walls that achieved excellent insulation. The company clearly showed that it could offer a solution to these hard to treat properties.”

Glenn Melvin, Managing Director of Walltransform Ltd commented: “We are delighted to be the recipient of this prestigious award, particularly to be recognised by our peers in the industry.  We continuously strive to improve and develop the range of systems Walltransform offer to meet the ever increasing need to insulate ‘hard to treat homes’.

Could we also take this opportunity to thank all the hard work done by the NIA.” 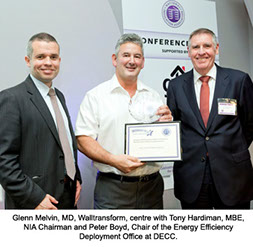 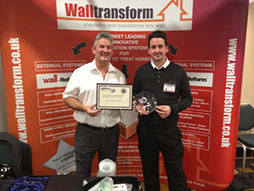 We were delighted and privileged to be awardees in the prestigious Ashden international Awards for the environment and invited to the awards ceremony at the National Geographical Society in London. The main speaker was Al Gore former U.S. Vice President leading environmental campaigner commented:-

“What the world needs now is solutions and it needs them quickly. Every finalist in the Ashden Awards has developed a practical response that we should applaud. They give us hope because they offer solutions that have been shown to work. That is what these awards are about”.

Walltransform greatly commend the work of these awards and those associated with them.

WallTransform was a finalist in the Carbon Trust Awards at the Royal Opera House in London.

Walltransform win a National BCE Award to be presented in June 2006, in London, by the Rt. Hon. David Cameron MP, for Business Commitment to the Environment.

The Fruits of their Labour – Walltransform wins two major awards

Walltransform have won an APPLE and an ORANGE at two separate award ceremonies held in London on 8th November 2005, for their product Wall-Reform.

The first award was an international Green Apple Award for best practice in the environment. Walltransform manufacture their product Wall-Reform, which was the Product category winner and won a ‘Green Champion Award’. As a Green Apple Award winner, Walltransform is said to be ‘one of the leaders in setting environmental standards for others to follow’. The award was presented at the House of Commons on the afternoon of the 8th.

The same night Walltransform won the ‘Orange Award for Bright Business’ at the national final of the National Business Awards, sponsored by Orange, held at The Grosvenor House in London. They had previously won the regional award at Manchester in July. The National Business Award’s has been described by Gordon Brown as ‘The Business Oscars’. Alistair Macleod Vice President of Business Solutions Orange UK presented Glenn Melvin with the award. He commented that the judges for this category were looking for someone whose ‘idea has made an outstanding and positive impact on their organisation’

Glenn Melvin is said to be delighted to receive such prestigious awards. ‘Both awards are a tremendous achievement and we are delighted to receive such recognition raising the profile of Wall-Reform. Wall-Reform is a unique thermally insulating plaster/render that can be applied internally or externally. Wall-Reform can reduce energy consumption, saving money, thereby helping the ‘Fuel Poor’ and reducing CO2 emissions significantly. It was initially aimed at the seven million solid wall properties not being insulated due to cost. It will also help to alleviate condensation and stop damp.

The product has been recognised by the Energy Savings Trust as an energy saving product. 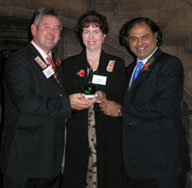 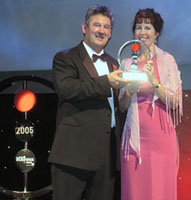 Walltransform, in October 2004, were runner up in the HSBC national business awards. This award shows the hard work and dedication the staff at Walltransform have put in, this has meant that Walltransform is recognised by the HSBC as a new outstanding up and coming national company.

At Walltransform, we’re always pleased to answer any questions about our products and services so please do get in touch;